Radon Mitigation systems are typically installed in a home to reduce the radon levels to an acceptable amount. The EPA is the governing body that gives us guidance on what an acceptable amount of Radon actually is. That magic number set by the EPA is 3.9 or lower. Ultimately, it is up to the homeowner to decide what level of radon is acceptable.

Now that a system is installed, how do you know it works? The levels were likely too high at some point and you (or the prior owner) decided to have the system installed, right? Well, Radon Gas is almost NEVER reduced to zero (no measurable radon) inside of a home, even with a mitigation system installed. Yep! You likely still have radon gas in your home.

The ONLY way to know if a system is reducing radon levels enough is to perform a Radon Test. That’s it. By far the biggest misconception I see with homeowners and buyers is that they do not need to test for Radon once a mitigation system is installed. This is incorrect and a very dangerous piece of advice. After a system is installed, the home should be tested to confirm the system works within 2 weeks. That way any corrections and improvements on the system can be made quickly. After that we recommend testing again every 2 years, during any change of ownership, after any remodels or renovations and after HVAC upgrades in the home.

What about this little device on the system, isn’t this showing the levels of Radon? 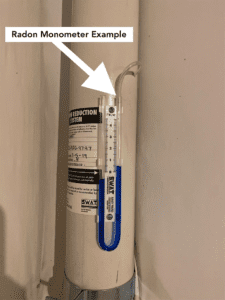 Radon Mitigation System Manometer
This device is NOT telling you anything about radon levels in the home. Specifically, this device is called a manometer and it indicates pressure within the system. Basically, the radon fan is either on or off at anytime, and this is your way of knowing. An active mitigation system will have a radon fan running 24/7. The fan is usually installed out of sight (in the attic, exterior etc..). When the manometer fluid levels out, it indicates there is no suction in the system so the fan is currently off. That lets you know the system is not working properly, needs repairs and radon gas levels are likely rising. The manometer simply gives the homeowner a convenient way to check on the system at anytime to make sure the fan is running. It’s also important to note that you may not have a manometer at all. They are only necessary when you have an “Active” system, meaning a fan is permanently installed. Some radon mitigation systems are designed to be “Passive”and do not need a manometer. This is common on new construction.

There are devices that actively monitor radon levels in the home and are quite accurate. This product by Airthings is a good example. A homeowner could install this device and use it in a similar way that a carbon monoxide detector works. It is important to note that while these devices can help indicate current Radon levels in a home, they do NOT replace a short-term radon test performed by a professional. Radon professionals should be certified to perform the test, use only approved devices that are approved by the NRPP, and use devices that are calibrated yearly in an approved lab. This is one area where it pays to hire a pro.

The absolute ONLY way to know the average radon levels in a home is to perform a test. We usually perform this test for our clients during a home inspection, but can do it at anytime. Don’t take it for granted, if you have a mitigation system installed you still need to test the home for Radon Gas.

Want to join the discussion?
Feel free to contribute!

Don’t Be Roped In by Amateurs

Hire an inspector that is certified, thorough, and knows what he’s doing.

We love hearing from you anytime!
Call, text or email us if you have any questions or use the online scheduler to set up a home inspection.

Do you need a Sewer Line inspection when buying a home?

Why does your exterior concrete crack and move, and what to do about it.
Scroll to top